Actress Kristen Bell hinted that she is married to Dax Shepard. Is she trying to hide something — or was it a slip-up? Get the details here! 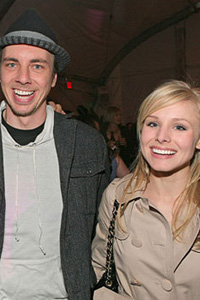 Actress Kristen Bell confused fans when she referred to her fiance Dax Shepard as her husband in a tweet.

“My adorable husband, @daxshepard1 voting 4 his favorite American Idol. Over and over again,” she tweeted, as she showed a picture of the Parenthood star voting for Pia Toscano.

The 30-year-old Forgetting Sarah Marshall actress has talked about how she “never loved dating” and prefers being in a stable relationship.

“I think it’s very uncomfortable to put yourself out there and be vulnerable,” she told Parade magazine about dating. “I’m much more comfortable in a relationship and I’m very happy.”

Bell’s publicist denies the couple has tied the knot and insists that she has called him “husband” in the past. So, is it like a cute nickname?

She has been open about her relationship with Shepard, so a wedding seems like a logical next step.

“There is almost nothing, barring a natural disaster, that I would let eat into my time at home, playing Scrabble with Dax or talking to my girlfriends,” she told Women’s Health magazine.

Bell and Shepard, 35, have been dating since 2007 and have been engaged since 2009. They met while filming the movie When in Rome.