The trailer for the highly anticipated Captain America, starring Chris Evans, was just released. We’ll let you know how Cap is shaping up.

We’ve been hearing about Captain America: The First Avenger forever now. We’ve been watching the lead-up to The Avengers, Marvel’s film with all their main characters (and directed by geek god Joss Whedon), since Iron Man blew audiences away. But Cap is the one that started it all. 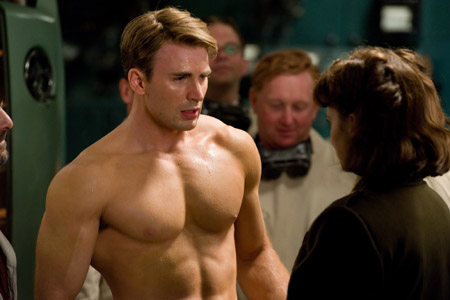 The adaptation of a much beloved comic book character into a film is always a dicey thing. Iron Man had it a bit easier because, though his comics had been around for decades, he wasn’t nearly as well known. But Cap…he’s different. He’s America. He’s the first. Audiences are likely to be far more harsh about this one.

When the first images of his costume hit the net, fanboys (and fangirls, including myself) were, for the most part, relieved. We weren’t going to cheese this up, it seemed. Chris Evans‘ casting seemed to split everyone down the middle though. He’s taken on comic book characters before. Fantastic Four didn’t exactly wow audiences, though that wasn’t entirely his fault. The Losers, though not a box office success, was actually pretty good. And I have a very soft place in my heart for Scott Pilgrim vs. the World. (Evans played Lucas Lee and he was hysterical.)

So, what did the full trailer show us? We get to see Steve Rogers as a 90-pound weakling. Now, most of us know his origin story, but if you don’t, Rogers is turned into a super soldier during WWII to combat the Nazis. The CGI is pretty phenomenal here. (I was worried.) Evans really does look like a skinny nerd. (Whether you’re a fan of CGI or not, it’s always best if it’s done on the body and not the eyes. That always gives it away.) We even see him battered around by Bucky Barnes (Sebastian Stan). We get to see the transformation and some interaction with lady love Peggy Carter (Hayley Atwell). Of course, we get a small glimpse of his nemesis, the Red Skull, played by Hugo Weaving. And Evans? Well, let’s just say, I’m totally convinced.

Overall, the trailer got me more excited for the film, something I can’t say about some of the other upcoming superhero flicks. (Thor could go either way, though I could look at Chris Hemsworth all day long.) We’re dying to know what you guys think. Let us know below.