Tonight on Private Practice: A Step Too Far, Addison takes a pregnancy test, while Sheldon’s loyalties are tested by a hot doc with a sharp pen.

In this week’s Private Practice, Addison (Kate Walsh) is hit hard by a flu bug… Or maybe it’s the stress from her mother’s suicide? When Amelia questions her, she is suspicious of the symptoms — exhaustion and nausea! Amelia’s theory sets off a whirlwind after Addie realizes her period is late. 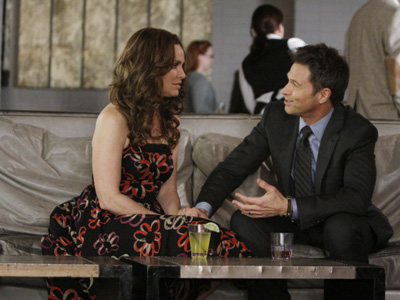 Though Addie has been dying to become a mommy, Sam isn’t too interested and it would take a miracle for her to get pregnant, anyway, so she’d given up. Now the question becomes: Will Addison pass the pregnancy test and get her miracle?

Meanwhile, Violet is over the moon about her book reviews, until she reads the review of Dr. Marla Phillips (Alex Kingston). The shrink says Violet is self-involved and lacks boundaries, sending her into a tailspin.

It helps her that the Oceanside crew supports her, but even that takes a turn when Sheldon falls for a hot doc at Violet’s book party. His loyalties are tested when he realizes the smart, gorgeous blonde is the woman who panned Violet’s tell-all. He gives her a piece of his mind, but she’s so hot he just might give her a piece of something else too.

There are, of course, some patients to contend with, as always. Cooper and Sam team up to help a young athlete and his family realize his health is more important than his wrestling career, while Addison and Pete’s patient is caught in a love triangle with her brother-in-law and sister, for whom she is a surrogate. It seems the surrogate and the daddy have fallen in love. Uh-oh.