Grey’s Anatomy fans are getting anxious for the big musical episode, but that’s not until next week, March 31. Never fear, however, the drama’s all new and tense as ever on Grey’s Anatomy: This Is How We Do It tonight, March 24, with the Chief in the center of it all. 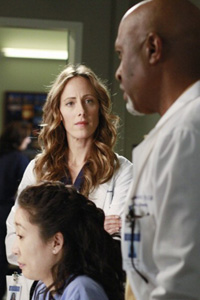 This week on Grey’s Anatomy, Richard hustles to get Adele (Loretta Devine) into Derek (Patrick Dempsey) and Meredith’s (Ellen Pompeo) Alzheimer’s trial. Unfortunately, Adele doesn’t actually believe she has the disease, which makes things more than a little difficult.

While the Chief tries to handle his ex, he’s concerned about Teddy and her hubby of convenience, Henry. Richard worries things are getting personal between the faux couple and after Henry goes on the fun drugs for a test, it appears he might be right about one of them. Looks like Henry’s newest medical complication could mean trouble for more than just his health.

Richard also has the residents jockeying for his attention, because the Chief Resident position is still up for grabs. His diabetes clinical trial is green lit this week, sending their campaigns into high gear.

It’s never all business on Grey’s Anatomy, however. A very pregnant Callie can’t wait for her very own baby shower, but two’s a crowd when Mark and Arizona team up to plan the big event. It seems Baby Daddy and Girlfriend have different ideas about just what kind of party this mommy-to-be is expecting.

Grey’s Anatomy: This Is How We Do It airs Thursday, March 24 at 9 pm, followed by a new Private Practice.

Watch a sneak peek of Grey’s Antomy: This Is How We Do It