Kirstie Alley is firing back at George Lopez after the late night host tastelessly mocked her weight on his show. 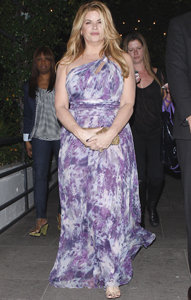 Kirstie Alley is happy to tell us exactly what she thinks of George Lopez — after all, he started it.

On his show Tuesday night, Lopez went over the line by calling the actress and Dancing With the Stars contestant a pig.

“She did a nice job,” George said after showing a DWTS clip of Alley dancing with Maksim Chmerkovskiy. “Her little hooves tapping away.”

Lopez then went off with a take on This Little Piggy Goes to Market, saying, “Before the show she went to market. And then she had roast beef. And this is her going all the way home.” Lopez then played a clip of a pig squealing while riding in a car.

Kirstie got her Twitter revenge. When one Twitter user wrote to her, “If you read my stream — I just called George Lopez a PIG,” Alley replied, “lol…a drunk pig…hehe.”

Translation: She may be a Fat Actress, but he’s a drunk pig.

Check out Kirstie Alley’s Dancing With the Stars performance here >>>