The man accused of stalking Ivanka Trump is facing new charges in New York after ignoring a restraining order. 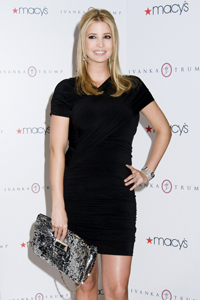 Justin Massler is facing newly upgraded charges after ignoring a court order to stay away from Ivanka Trump.

Massler was initially arrested last year after unleashing a string of horrifying emails and tweets about the Celebrity Apprentice co-host, including a threat to kill himself in her Manhattan jewelry store.

New York assistant district attorney Lucrece Francois told a judge that Massler also said he would die before being caught and “would go down in a hail of gunfire.”

Massler’s lawyer says the guy committed no crime and is guilty of nothing more than a bad sense of humor, but the 28-year-old has spent time in a mental hospital, had his name legally changed to Cloud Starchaser and gave his address to police as “a volcano in Hawaii.”

After last year’s arrest, “Cloud Starchaser” was released on $10,000 bail and was ordered not to contact Ivanka and some of her family — but Massler kept trying to communicate with her, her husband and others close to her. He now faces felony criminal contempt charges and faces up to four years in prison.

Ivanka is expecting her first baby in late July.