Rob Kardashian was rushed to the hospital and had to undergo emergency surgery to remove his appendix!

Rob Kardashian, brother of Kourtney, Khloe and Kim Kardashian, was rushed to an LA-area hospital Tuesday where he underwent an emergency appendectomy. 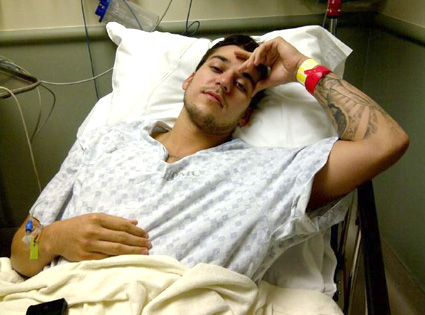 “He was rushed to West Hills Hospital last night for emergency appendix surgery,” mom Kris Jenner told E! News. “I’m going back there now. He will be fine!”

Turns out the 24-year-old had been complaining about stomachaches to his fam, but when the pain became intense, his mom packed him up and headed over to the ER.

“Thank god they got it before it burst! He will be fine and these days it’s arthroscopic! Never a dull moment around here!” Kris said.

Rob is just fine now — in fact, he even sent fans a Twitpic and message from his hospital bed.

“This is what happens if you don’t eat your Wheaties,” he tweeted.

Stepdad Bruce Jenner would probably agree, seeing as how he actually appeared on the Wheaties box and all.

read on for more kardashians