Lindsay Lohan has refused to take a plea bargain in her shoplifting case because she insists she is innocent! 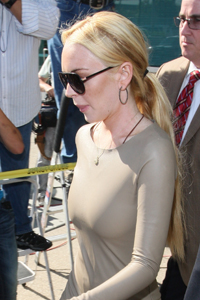 Lindsay Lohan is nothing if not obstinate: The accused thief would rather take her chances with a jury than accept a plea deal that would have sent her to jail for six months.

Lindsay is adamant that she did not steal the necklace, despite a history of things disappearing while she’s around, like clothes and jewelry from photo shoots and clothes from friends’ houses (more on that in a minute).

“Ms. Lohan has maintained her innocence from the moment this case was filed and she has never wavered,” her attorney, Shawn Holley, said in a statement to E! News. “Though many advised her to follow the safe route by taking ‘the deal,’ the truth is, Ms. Lohan is innocent; she has a strong defense; and we are confident that a jury will listen to the evidence fairly and acquit her.”

The case is risky on both sides. While the prosecution does have an in-store security video showing Lindsay putting on the necklace in question and leaving with it, the video has no sound — making it impossible to disprove Lindsay’s claim that the jeweler agreed to lend it to her.

In the prosecution’s favor? Intent. Lindsay could also say she left with the necklace by accident — that she forgot she was wearing it after trying on so many other pieces, and the fact that she left her own necklace at the store backs up that fact. However, Linds has that aforementioned history of at least being accused of theft, even though none of it ever went this far. Model Lauren Hastings says Lindsay stole $10,000 worth of clothes and accessories from her back in 2007, the same year Linds was accused of pilfering thousands of dollars worth of Louis Vuitton threads from a photo shoot. In 2009, $40,000 worth of Dior jewelry went missing from an Elle photo shoot Lindsay did (the dollar figure was adjusted down from the original estimate of $500,000), and a friend’s missing $35,000 Rolex showed up on Lindsay’s wrist a couple of weeks later.

As far as intent goes, all the prosecution would have to do is point to these past incidents — but Lindsay’s lawyer could move to prevent it from coming out in open court, since no police reports were filed in any of the cases.

Lindsay will return to court on April 22 for a preliminary hearing in which a judge will decide if the prosecution has enough of a case to head to trial.

If convicted of felony theft, the prosecution is asking for a six-month jail sentence. If Lindsay had taken the plea she would have gotten three months, which would have been whittled down to 19 days due to overcrowding.