During an appearance on BET’s 106 & Park, Chris Brown publicly apologized for his behavior backstage after his GMA appearance. 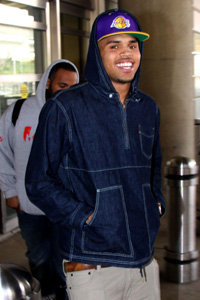 According to transcripts from the BET show, 106 & Park, Chris Brown apologized for freaking out during a recent appearance on Good Morning America.

During his appearance on Good Morning America, Brown was questioned about contact with his former girlfriend Rihanna now that the restraining order against him has been relaxed. Unfortunately Robin Roberts’ question left the rapper a bit miffed. After a performance of his new single Yeah 3X, Chris Brown became enraged backstage. Reports say he took his anger out on his dressing room and a nearby window.

On 106 & Park, Brown continued, “Yes, I got very emotional. And I apologize for acting like that.”

The singer admitted he got flustered when the line of questioning shifted from his professional life to his personal life. He assured fans it wasn’t his intention to put anyone in danger at Good Morning America but he had to get out “the anger that I had inside of me.”

Chris Brown has been asked back to Good Morning America and Roberts said, “We wish him the absolute best and… we’ve extended the invitation to him and I sure hope that he takes us up on it, because we’d love to have another chat with him.”

Do you think Chris Brown was sincere in his apology to the fans and GMA? Should GMA have moved on with a different line of questioning? Tell us, we want to know.