Former Saved by the Bell and Showgirls actress Elizabeth Berkley is now taking on another venture: Author. What kind of book is she writing for teen girls? 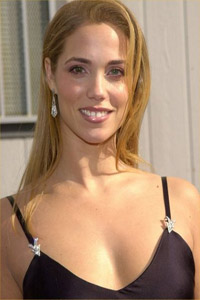 You might want to sit down for this: Showgirls star Elizabeth Berkley is penning a self-esteem book for tweens and teens. That’s right: The woman who shook her moneymaker nude on screen in a campy — and NC-17 — film is giving girls advice on how to feel better about themselves.

Yes, Berkley also played Jessie on the wildly popular teen sitcom Saved By the Bell during the 90s and decided to pursue this new venture after a new generation of girls started asking for her autograph.

“Teen girls started to approach me for pictures and autographs, and my husband [Ralph Lauren’s nephew, George Lauren] noticed a natural interaction and encouraged me to start with a column,” Berkley told RadarOnline.

The book, titled Ask Elizabeth, will offer Berkley’s self-esteem secrets and tips to overcome self-doubt. “Girls’ inner critics are starting to reveal themselves at a younger and younger age,” she said. “And body image issues are an aspect of their lives that is causing them low self-esteem and day-to-day suffering.”

Well, maybe we’ll give her the benefit of the doubt: She did get a lot of flack for Showgirls. We think the best advice she can give girls, however, goes something like, “Don’t star in NC-17-rated films.”

Do you think it’s appropriate that Elizabeth Berkley is writing a self-esteem book?