Actress Paz de la Huerta was arrested last night after getting in a drunken brawl with former The City’s Samantha Swetra. Get all the details here. 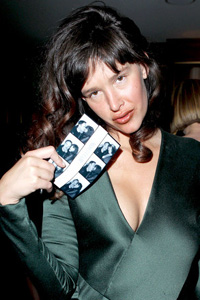 Boardwalk Empire star Paz de la Huerta was arrested after she got in a drunken fight with The City’s Samantha Swetra. Paz reportedly started flirting with Swetra’s boyfriend, causing the reality star to start talking trash about how drunk the actress was.

Paz then threw a glass and punched Swetra — causing shards of glass to stick into her leg! Surprisingly, Lindsay Lohan was at the NYC Standard and is friends with Swetra and immediately came to her aid.

Security guards quickly escorted Paz out of the building. Swetra has filed a police report against the Boardwalk Empire star, and TMZ is reporting that she received a desk appearance ticket and is due back in court April 18.

Paz, who plays Steve Buscemi’s girlfriend in the hit HBO show, has been seen out in recent months partying hard.

“[De la Huerta] was charged with assault third degree,” a spokeswoman for the NYPD told E! online. “She was arrested yesterday. The altercation happened Sunday.”