Elizabeth Taylor was more than a gifted actress and the biggest star of her time — she was also a tremendous humanitarian who was renowned for her charitable heart. 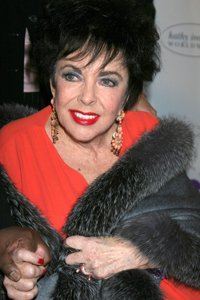 It is not a far stretch to say that few in Hollywood or elsewhere have done more to further the cause of AIDS research and the public’s knowledge of the disease than Elizabeth Taylor.

When Rock Hudson died of AIDS in 1985, Elizabeth Taylor seized the opportunity to de-stigmatize the victims of the disease and raise funds for research. She helped found the American Foundation for AIDS Research and created the Elizabeth Taylor AIDS Foundation, successfully raising over $50 million.

“I decided that with my name I could open certain doors, that I was a commodity in myself — and I’m not talking as an actress,” she said. “I could take the fame I’d resented and tried to get away from for so many years — but you can never get away from it — and use it to do some good. I wanted to retire, but the tabloids wouldn’t let me. So I thought, if you’re going to screw me over, I’ll use you.”

In fact, Taylor did such good that she was honored with a special Oscar in 1993: The Jean Hersholt Humanitarian Award.

In her acceptance speech Taylor said, “I call upon you to draw from the depths of your being — to prove that we are a human race, to prove that our love outweighs our need to hate, that our compassion is more compelling than our need to blame.”

Taylor was most recently honored by the organization she helped found with the amfAR Award of Courage “for outstanding leadership and distinguished service in furthering amfAR’s mission, and for playing a vital role in increasing AIDS awareness and accelerating the pace of HIV/AIDS research.”

At a time when no one in the White House (we’re looking at you, Ronald Reagan) was doing anything to educate the public about HIV and AIDS or support research into this terrible disease, the common sense and compassion of one radiant star turned the tide of public opinion and, just possibly, helped save millions of lives.

And for that, Dame Elizabeth Taylor will remain a star forever.

read on for more elizabeth taylor