Robert Pattinson and Reese Witherspoon have just signed on to present at the ACM awards. We’ll give you the details. 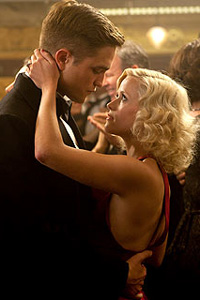 Heartthrob Robert Pattinson and Oscar winner Reese Witherspoon have joined the list of presenters for the 46th Annual Academy of Country Music Awards.

The two have a movie to promote, you know. They’re starring in Water for Elephants, based on the historical romance novel by Sara Gruen about a traveling circus. The trailer is gorgeous and the film just might be the one to help RPatz shake his vampire persona.

Whether you’re a fan of the Twilight franchise or not, you know a film that popular could easily cause the poor man to be offered supernatural love stories for the rest of his career. Pattinson is currently finishing up the final Twilight films, Breaking Dawn parts one and two, which feature the highly anticipated wedding, sex scene and vampire birth.

The two will join Miranda Lambert, Brad Paisley, Taylor Swift and Keith Urban, among others, and Blake Shelton and Reba McEntire are set to host.