Kiefer Sutherland says he is sure Charlie Sheen will be just fine, thankyouverymuch. 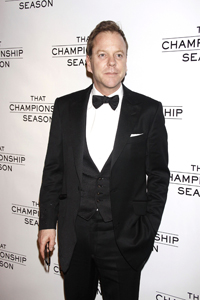 Here’s the thing about Kiefer Sutherland: He doesn’t own a computer. He was the last organism in the Milky Way Galaxy to hear about Charlie Sheen‘s shenanigans. And he knows how to answer a messy question with the utmost diplomacy.

Sutherland, who costarred with Sheen in Young Guns and The Three Musketeers, was hammered with questions by Barbara Walters in an appearance on The View. Sutherland admitted he literally just heard what was going on moments before going on stage.

“I haven’t watched a whole lot of it,” Sutherland said. “I’m the last person I know without a computer and I’m not into all of that stuff yet. I know Charlie as a really funny, talented, loyal, fiercely loyal guy. And clearly people are concerned about him and worried about him.”

The 24 actor, who has had his own share of substance abuse issues, says he was most touched by Martin Sheen‘s reaction to his son’s issues.

“A British interviewer asked him, ‘I’m sorry to bother you about this, it must be a difficult time with everything your son is going through, how do you feel?’ He as a father said, ‘You have to love more.’ And as a father, that really touched me.” (Of course, this contradicts his statement that he didn’t know what was happening earlier, but we’ll let that slide…)

“And so with regards to Charlie, I mean he’s one of those cats that always seem to land on his feet and I wish him the best,” he continued.

“I care a lot about him. And obviously, like a lot of people you get worried, but it’s not something I know a whole lot about.”