Prince William and Kate Middleton’s royal carriage was revealed and the wedding day staple has a family connection. Read on to find out which famous princess rode in the couple’s royal carriage.

Prince William and Kate Middleton will take their first ride as husband and wife in the very same carriage that Princess Diana rode in on her wedding day back in 1981. Princess Diana is definitely going to be remembered at her son’s wedding with little touches of mom lingering in the details. 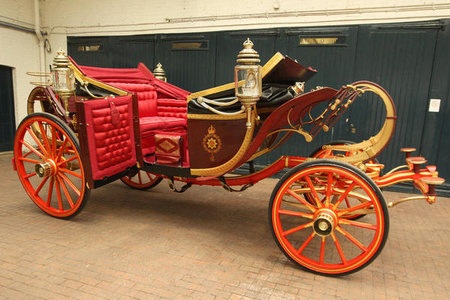 Once the royal nuptials have finished at Westminster Abbeyon April 29, Prince William and Kate Middleton will board the 109-year-old carriage and journey to Buckingham Palace.

The red and gold State Landau carriage will lead a procession complete with four horse-drawn coaches housing the wedding party. According to the royal website, the wedding party will include Kate Middleton’s parents, Prince Charles and Camilla, the Duchess of Cornwall, and Queen Elizabeth and the Duke of Edinburgh.

Other famous royals who have used the open-top carriage besides Princess Diana and Prince Charles include Prince Andrew and Sarah Ferguson. When it’s not being used to chauffeur husbands and wives, the carriage is used to carry the Queen to London where she meets with heads of foreign states.

We know what you’re thinking — what happens if it rains? Should bad weather rear its ugly head, the couple will travel in a glass coach.

Prior to the ceremony, Kate Middleton will arrive by a Rolls-Royce Phantom VI that will also carry her father.

Are you excited for the royal wedding of Prince William and Kate Middleton or has the novelty worn off? We’re curious to see how many people wake up on April 29 and glue themselves to the television for all the juicy details.