Susan Lucci may soon be out of a job as ABC is considering canceling the soap opera All My Children.

All My Children’s 41-year run may soon be coming to an end as ABC is considering pulling the plug on the soap opera due to record low ratings.

All My Children is joining other soap operas that have been canceled in recent years, including Guiding Light, As the World Turns and Passions. Deadline is reporting the network is considering replacing the soap with a talk show by this fall. 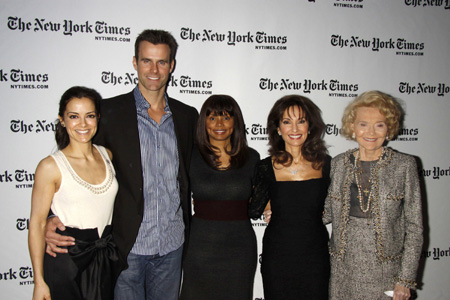 Even though All My Children has launched the careers of Sarah Michelle Gellar, Amanda Seyfried, Josh Duhamel and Kelly Ripa, it hasn’t resonated with recent audiences. In fact, it has been coming in last among the six daytime soaps on the air and drawing in 34 percent less viewers than last March.

One of the most famous faces on the show, Susan Lucci, who plays Erica Kane, has been nominated for a Daytime Emmy an astounding 18 times and won for the first time in 1999.

Other notable All My Children actors that would be out of a job include Rebecca Budig and Cameron Mathison.

The announcement on All My Children’s fate should be announced tomorrow.

For more soaps and All My Children news, check out Soaps.com.