Charlie Sheen surprised Jimmy Kimmel with an on-air kiss. I wonder if tiger blood is contagious. 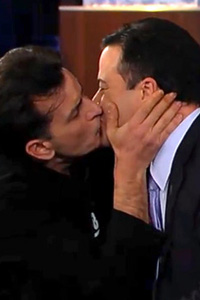 Charlie Sheen skipped the handshake and went for a kiss when he appeared on Jimmy Kimmel’s talk show on ABC. He planted a big ol’ kiss on the talk show host. “Your lips are very moist,” Sheen told Kimmel after the lip lock.

He continued to work the crowd by giving fellow guest Mark Cuban a big hug and passed out t-shirts featuring his famous lines, including “Tiger blood” and “Winning.”

He gave Kimmel a mug with a fox on it, fueling the fire that Sheen is in talks with Fox for a show. When asked by Kimmel what the fox meant, Sheen coyly replied, “I’ll let you figure it out.”

In the meantime, Kimmel is still recovering from his Charlie Sheen kiss, tweeting: “We had a very very famous surprise walk-on guest tonight. My head is still spinning. Legend has it that if Charlie Sheen kisses you at midnight, you turn into a whorewolf.”

Besides making t-shirts with his now famous lines, Sheen is also working on his upcoming tour, Charlie Sheen Live: My Violent Torpedo of Truth.