The Dancing With the Stars season 12 premiere delivered the bling, bang and kicks fans have been missing. In a night of foxtrots and cha chas, Ralph Macchio and Kirstie Alley controlled the dance floor, becoming the celebs to beat. Chelsea Kane, Hines Ward and Kendra Wilkinson prove to be contenders to watch.

Ralph Macchio delivered during his stint on Psych last season, but the dance floor looks to be his real ticket back into the hearts of Americans. With the “best foxtrot” of the Dancing With the Stars premiere, according to Len Goodman, Macchio is still “a bit rough around the edges,” but he and Karina Smirnoff took the lead with 24 points. 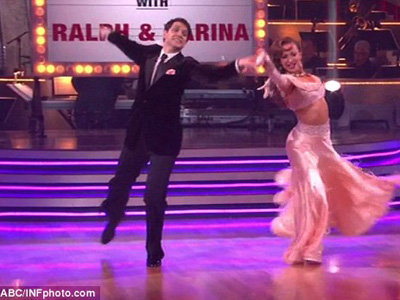 “What an amazing surprise!” Carrie Ann Inaba raved. “It shocked me that you had such elegance.”

Those who loved the Karate Kid may have been pleasantly surprised, but not quite shocked to see that Macchio’s still got it. The screaming ladies in the audience made it clear he still has “it.” Not only did he get Bruno Tonioli out of his seat, but he also won over the girls who didn’t know there was a Karate Kid before Jaden Smith.

Kirstie Alley was also a crowd pleaser, earning tons of audience love and 23 points from the judges. The 60-year-old Fat Actress alum and Maksim Chmerkovskiy cha cha’d to Cee Lo’s Forget You, leaving Bruno growling with delight over Alley’s footwork.

Disney princess Chelsea Kane and NFL pro Hines Ward shared the third place spot, earning 21 points each. Both won over the judges and the audience with a combination of moves and energy.

Girl Next Door alum Kendra Wilkinson didn’t make it into the top three, but she never has trouble working a crowd. She scored 18 points with her energy and tatas — oops, we mean cha cha! — but needs to focus on her footwork.

Mike Catherwood and Wendy Williams closed out the competition, scoring 13 and 14 points, respectively. These two have some serious work to do if they want to stay in the game.

Week two could change everything, of course. All 11 contenders return to the floor Monday, giving them one more chance to impress before America gets in on the voting and helps determine who will go home in the season’s first results show, March 29 on ABC.

Tell us: Do you have a favorite yet?