Chris Brown appeared on ABC’s Good Morning America Tuesday to promote his new album, and the interview was nothing out of the ordinary. What he did afterward was, though. Reportedly angered by interviewer Robin Robert’s questions about Brown and Rihanna, he had a meltdown backstage and broke a window before hitting New York City’s Times Square without a shirt. 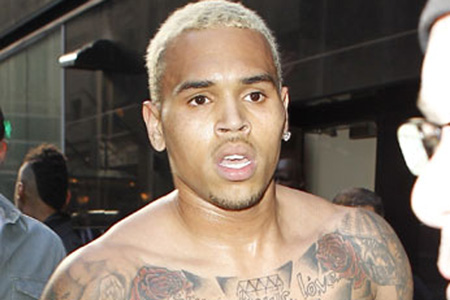 “A friend at the show tells me everyone was terrified,” PopEater’s Rob Shuter said. “He is meant to perform on Dancing With the Stars, but now ABC news employees are putting pressure on the network to cancel him due to concerns over staff safety.”

Of course, Brown took to Twitter immediately after to defend his actions.

“I’m so over people bringing this past s–t up!!! Yet we praise Charlie Sheen and other celebs for there[sic] (expletive),” Brown tweeted — and immediately deleted.

Looks like someone is taking lessons from the “Kanye West’s School of Publicity.” West freaked out after a November appearance on the Today Show when Matt Lauer asked him about his infamous VMA moment with Taylor Swift.

“I don’t mess with Matt Lauer or the Today Show… and that’s a very nice way for me to put it! HE TRIED TO FORCE MY ANSWERS. IT WAS VERY BRUTAL AND I CAME THERE WITH ONLY POSITIVE INTENT. I feel very alone very used very tortured very forced very misunderstood very hollow very very misused. I don’t trust anyone but myself! Everyone has an agenda. I don’t do press anymore. I can’t be everything to everybody anymore,” West tweeted after the confrontational interview.

How convenient it is that both West and Brown had meltdowns when they have albums to promote. An interview on a morning show isn’t that newsworthy — but a morning show meltdown is.

And now, fans are tweeting Brown to say how they’re buying multiple copies of his F.A.M.E. album, out today.