Chris Brown had a violent outburst after his appearance on Good Morning America today — all because Robin Roberts asked him about Rihanna. 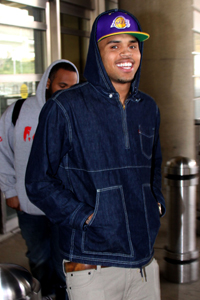 Chris Brown is accused of threatening a segment producer and shattering a window in his dressing room after Robin Roberts asked him one too many questions about Rihanna during his GMA appearance this morning.

Roberts claims she and other staffers cleared the questions with Brown before they went on air, but the singer was visibly uncomfortable with the line of questioning once cameras were rolling and tried to change the subject back to his new album, with no avail.

Once the cameras were off, Brown turned into the Incredible Hulk — confronting a segment producer by getting in his face and staring him down, smashing a window in his dressing room with a chair, then ripping off his shirt and disappearing from the set.

Brown almost immediately tweeted, “I’m so over people bringing this past s**t up!!! Yet we praise Charlie Sheen and other celebs for there bulls**t.”

The tweet was quickly removed and replaced with, “All my fans!!! This album is for you and only you!!! I’m so tried of everyone else!! Honestly!! I love team breezy!!”

Here’s the major issue with the incident: Brown is still on probation and smashing the window could mean he committed two different crimes, vandalism and assault (a shard of glass fell on a passerby). Worst case scenario — the judge could revoke his probation and send him to prison.