The guy who wrote the Oscar jokes for James Franco and Anne Hathaway is speaking out against the actor’s miserable performance — and Franco is not amused. 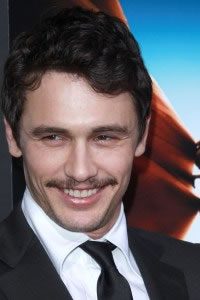 James Franco bombed at the Oscars, disappeared into the night and didn’t speak of it again — until now.

First, writer Bruce Vilanch told Vulture why and how hard Franco failed. “He has so many balls in the air, he didn’t get to town till Thursday before the show on Sunday,” Vilanch said.

“I don’t think he realized how big a deal it is to do it until he was actually confronted with it. I think he thought he would kind of… I don’t know what he thought. I thought maybe it was a performance-art prank, and then I realized he sincerely wanted to do it. But it’s outside of those guys’ comfort zones. The only people who know how to host those shows are people who get up onstage every night and say, ‘Good evening, ladies and gentlemen. A funny thing happened…’ Or people like Bette [Midler] who get up and sing all night and tell stories.”

So was Franco high?

What was James Franco’s response? A poorly-drawn Microsoft Paint creation he posted on Twitter, entitled, “Bruce, he let me down.” On it, he wrote a caption as if Vilanch was speaking: “James [bleeped] up the Oscars. Trust me, I know comedy. I mean come on, I write for Bette Midler.”

The photo has since been removed from his page, but lives on all over the rest of the Internet.