The mother of Miley Cyrus is speaking out about how her family is being patched back together after calling off her divorce from Billy Ray Cyrus. 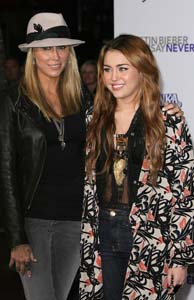 Tish Cyrus is talking about bringing her family back together after Billy Ray Cyrus called off the couple’s divorce.

“Big thanks to all of our family, friends, and fans who have kept us in their thoughts and prayers,” Tish wrote on her official Facebook page. “I feel so blessed to have so much support from all of you.”

“Our family weathered a huge storm and I feel we are stronger than we have ever been,” she continued. “Much love to all of you guys! You’re the BEST.”

The father of Miley Cyrus filed for divorce from Tish amidst rumors that she had a fling with Bret Michaels while he was working on a project with the teen. Billy Ray later blamed Hannah Montana and the fame it brought for ruining his family.

Billy Ray announced the divorce was off on The View last week.