Sammy Hagar opens up in his new memoir about his alien encounters. “That happened. That friggin’ happened, I’ll tell you right now,” he tells MTV. 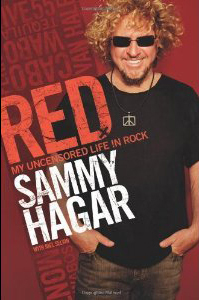 Former Van Halen rocker Sammy Hagar shares a lot in his new memoir, Red: My Uncensored Life in Rock — including his alien encounter.

The 62-year-old told MTV Hive that he saw a ship and two creatures who “tapped into my mind through some kind of mysterious wireless connection.”

He goes on to explain the experience in detail. “It was real. They were plugged into me. It was a download situation… or, they uploaded something from my brain, like an experiment… They were tapped into my brain and the knowledge was transferred back and forth.”

He said that this happened in Fontana, California, however, he says he had another encounter with aliens when he was a 4-year-old!

“One time I saw what I considered to be, well, at the time I thought it was a car with no wheels,” Hagar remembers. “We lived out in the country and I saw this thing floating across a field, creating this big dust storm. I threw rocks at it… And I don’t know what happened after that.”

What do you think? Too much drugs and booze in the past — or did Hagar really have an alien encounter?