The ABC Wednesday night laughs start at 8 p.m. with some family mayhem on The Middle: Spring Cleaning. The Hecks decide to attack 20 years of clutter and discover some things are better left buried in the past. Meanwhile, Brick brings in money by selling answers for a dollar at his “neighborhood information stand.” 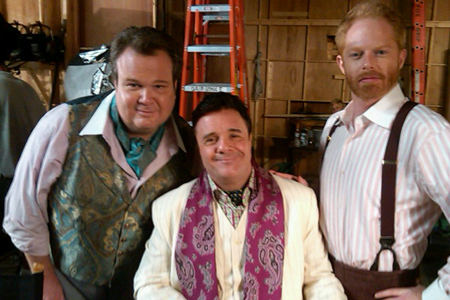 It’s a rebroadcast of The Middle: Friends, Lies, and Videotape at 8:30 p.m., with Kristin Cavallari (The Hills) as Axl’s hot teacher. While Frankie and Brick tackle friendship together, Sue defies her parents for the first time and suffers the consequences.

Then it’s time for Modern Family: Boys’ Night at 9 p.m. Jay talks his way out of a night at the symphony with Gloria and Manny, only to stumble into the middle of Mitchell and Cameron’s boys’ night. Jay may get a crash course in gay dishing when he sits down for drinks with his son, Cam, over the top Pepper (Nathan Lane, The Producers, The Bird Cage) and a few of their friends. Meanwhile, Phil and Claire are concerned about Luke’s new pal, grumpy old Mr. Kleezak (Philip Baker Hall, Magnolia), while Haley has an adventure in babysitting with Lily.

It’s game on at 9:30 p.m. with Mr. Sunshine: Celebrity Tennis. Ben jumps into a celebrity tournament when Alonzo’s doubles partner backs out. The guys go up against Fred Savage and tennis legend Jimmy Connors, but the team-up may cause some off-court tension. It seems Alonzo doesn’t know Ben was the “other guy” before he and Alice got serious.

After the laughs, it’s time for some Off the Map drama, which comes with a sneak peek of next week’s musical Grey’s Anatomy: The Music Event.