The hit HBO show Big Love ended last night after five seasons — and it went out in a big way. The show, starring Bill Paxton, Chloe Sevigny, Ginnifer Goodwin and Jeanne Tripplehorn, was controversial in its portrayal of polygamy — so it only seemed natural that the show would end in a controversial way.

The Big Love finale started as Bill Henrickson (played by Paxton) faces jail time in his statutory rape case. He pleads with Congress to legalize polygamy and earns the admiration of the Mormon fundamentalist group, Juniper Creek. 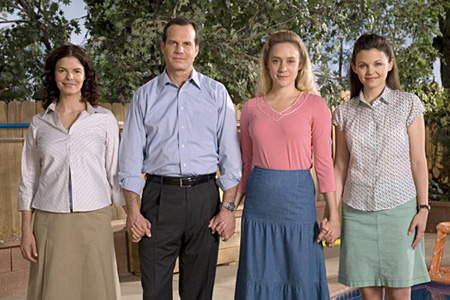 Henrickson wouldn’t stick around long enough to see what happened next, however; an angry neighbor shoots him in the chest because of his success in a down economy. Henrickson asks for a blessing before dying on the ground. The show ends with the three wives cohabitating even after their husband has died.

Fans of Big Love were sad to see it go — but its explosive ending was fitting for a show that broke new television ground.

What did you think of the Big Love finale? Will you miss the show?