Spice Girl Mel B and her husband Stephen Belafonte are expecting their first child together. 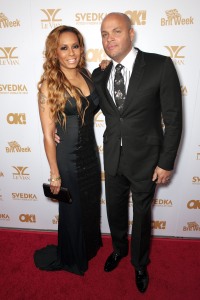 Mel B, also known as Melanie Brown, is reportedly due in July or August. The 35-year-old entertainer recently told Hello! magazine she and her business partner-husband Stephen Belafonte are “really excited about it and ready for it.”

We can only hope the pregnancy is detailed on another season of the couple’s reality show, Mel B: It’s a Scary World.

Mel B and Stephen Belafonte, 35, already have their hands full raising children from previous relationships. She has two daughters, Phoenix, 12, and Angel, 3, and he has a daughter Giselle, 6. From the amount of love and care that was shown on their reality show in making their blended family work, there is no doubt this new baby is going to be doted upon.

“Both my pregnancies have been lucky and happy and exciting, no matter what situation I’ve been in,” Brown said. “This is different because we have been married for four years, we have a history together, we’re best friends, we’re in it together, and he’s totally supportive.”

While Mel B is the creator of her own fitness video, don’t look for her to stress too much over her growing baby bump in the upcoming months. “I like the feeling of being pregnant. I like being able to just eat something if I’m craving it,” she revealed. “I definitely do put on weight, but I think you’re meant to when you’re pregnant. I think it’s healthy.”

Congratulations go out to Mel B and Stephen Belafonte. Do you think Mel B, Emma Bunton and Victoria Beckham will start a band with their new additions once they’re born? Here’s to hoping!