Ricky Martin has been honored with the Vito Russo Award, lauding openly gay and lesbian entertainers, by GLAAD. 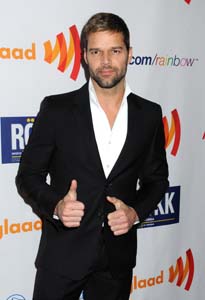 After years of public speculation, singer Ricky Martin came out of the closet in 2010 — and now he has been given the Vito Russo Award, honoring openly gay and lesbian entertainers, by GLAAD.

“I just want to be free,” Ricky said in his acceptance speech. “I can say today I’m free. And for that I definitely need to thank my parents for being so supportive, my mother and my dad for their unconditional love, and my friends, my family, my fans. And my partner in crime and my boyfriend Carlos.”

Ricky, who is now openly livin’ la vida loca with his partner Carlos, has twin boys and is currently preparing to go on tour.