Add Dave Grohl to the growing list of rock musicians who can’t stand Glee or its creator Ryan Murphy. 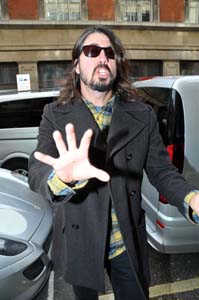 Foo Fighters frontman Dave Grohl is throwing his support behind musicians who just say no to Glee.

The former Nirvana drummer had some choice words for show creator Ryan Murphy, who has a habit of trashing people in the press when they decline to have their music featured on the hit musical.

Grohl told The Hollywood Reporter, “It’s every band’s right, you shouldn’t have to do (expletive) Glee. And then the guy who created Glee is so offended that we’re not, like, begging to be on his (expletive) show… (expletive) that guy for thinking anybody and everybody should want to do Glee.”

Tell us how you really feel, Dave.

“The Glee guy, what a (expletive) jerk. Slash was the first one. He wanted to do Guns ‘n’ Roses and Slash is like, ‘I hate (expletive) musicals. It’s worse than Grease.’ Then [Murphy’s] like, ‘Well, of course he’d say that. He’s a washed up ol’ rock star. That’s what they (expletive) do.’ And then Kings of Leon say, ‘No, we don’t want to be on your show.’ And then he’s like, ‘Snotty little (expletive)…’ And it’s just like, ‘Dude, maybe not everyone loves Glee.’ Me included.”

Grohl made his comments at a party for a Foo Fighters documentary at SXSW. Let’s just hope he didn’t hear Casey Abrams butcher Smells Like Teen Spirit on American Idol last week.