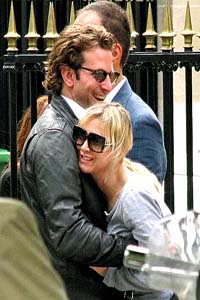 The relationship between Bradley Cooper and Renee Zellweger wasn’t Limitless — the couple has split, according to People.

“I can’t say enough about her,” Cooper said of Zellweger while promoting Case 39. “I just love her. I [loved] coming to work. I love acting with her. I can learn so much from her.”

The couple’s status was questioned when they attended a pre-Oscars bash in February but didn’t interact, according to People.

Neither Cooper nor Zellweger is a stranger to challenging relationships. Zellweger famously annulled her marriage to country crooner Kenny Chesney in 2005, and Cooper divorced actress Jennifer Esposito in 2007 after just a few months of marriage.

The actors’ reps both declined to comment, but we’ll likely hear much more about this in the coming weeks.