Lindsay Lohan spent her week back in New York with stops at some of NYC’s hottest clubs. Did she fall off the wagon?

Guess Lindsay Lohan’s version of “family time” includes lots of partying. The rehabbed and possibly jailbound actress was spotted out in New York City this week. 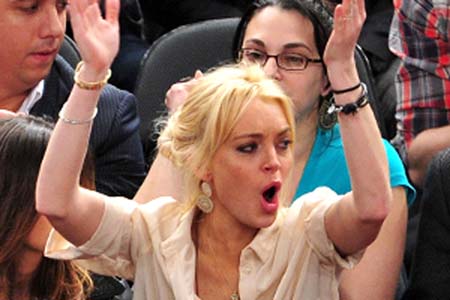 Lohan was first spotted Wednesday at The Lion before she made her way to two more clubs. She was then seen kissing a random guy, after which she met up with her ex-girlfriend, Samantha Ronson, actor Tyson Beckford and DJ Phresh at the Standard Hotel.

“Tyson was telling her, ‘You’re so amazing, you’re so beautiful, you’re so talented. It would be so sad to see that talent go to waste.’ They cheered with water,” a source told the New York Post.

“Her family is furious. She’s supposed to be spending time with them and deciding if she’ll take a plea deal. It’s almost as if she thinks she may as well have one last final fling,” the source continued.

Don’t worry: She ended up going out with her family after all — to a Knicks game.

“With my brothers and my sister at the Knicks game!!! go knicks!! love their green uniforms for st patricks day!” Lohan tweeted.

To Lohan’s credit, it sounds like she was really drinking water at The Standard, and later, at 10ak.

“I’ve spoken to her, and she seems to be in a really good place,” a Lohan friend told E! Online. “I think it’s good for her to be in New York as opposed to L.A. She went out Wednesday night to have a good time. She was dancing. I think it showed she can party without partying.”

We’re not buying it, but here’s hoping she’s really on the straight and narrow.