Early in Paul, audiences are introduced to how the alien of the title winds up in the middle of the desert of the American Southwest. It’s early 1960s America and in a page borrowed from the legendary Area 51 lore, Paul has crash landed far from home.

Paul serves as the next comedic vehicle for UK comedy titans Simon Pegg and Nick Frost. Paul is their first movie together filmed in the U.S. after the two UK hits Shaun of the Dead and Hot Fuzz. 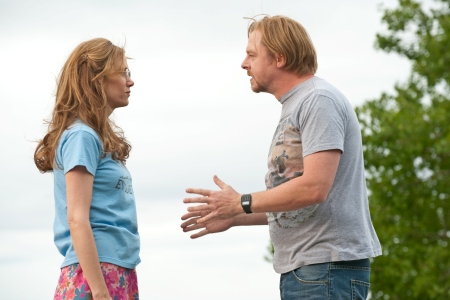 After the initial crash sequence, Paul takes audiences to Comic-Con in San Diego and introduces Graeme Willy (Pegg) and Clive Gollings (Frost), two British sci-fi fans who have made a pilgrimage of sorts. After the San Diego geek fest, the pair hops into their rented RV for a tour of alien sighting hotspots across the Southwest.

After stopping at an alien-themed diner — manned by the always terrific Jane Lynch — the boys head out seeking more alien observation history. When a car in front of them crashes, they stop to help and have their own extraterrestrial experience. Graeme and Clive meet Paul, a cute little alien voiced by Seth Rogen.

In Pegg and Frost’s Paul, they have assembled a top notch cast including Jason Bateman as a Federal Agent hot on Paul’s trail, Kristen Wiig as a fundamental Christian they pick up while fleeing from the ever-approaching Bateman, Blythe Danner as the woman who first met Paul as a little girl years ago when his craft crashed in her field and Bill Hader as one of Bateman’s federal agent associates.

Paul is a must-see because audiences haven’t seen a comedy/sci-fi film quite like this. The film has action, suspense and of course a ton of humor that makes it unique in the movie market today. Pegg and Frost alone would make any film they make worthy of a look, but in Paul they have taken their comedic chemistry to new levels. Their use of sci-fi pop culture references is witty and smart. Just a hint: The scene where Paul is on the phone with Steven Spielberg giving him the idea for E.T. is priceless! 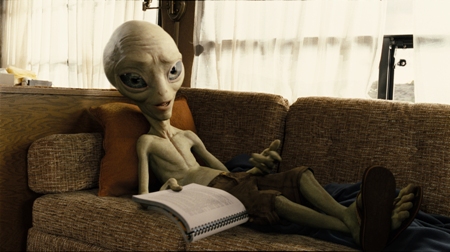 You don’t have to be a sci-fi geek to appreciate Paul, either. There’s romance, intrigue and as we said before, Paul is unlike anything out there.

Lastly, there is Paul himself as voiced by Seth Rogen. Rogen is impeccably cast as the voice of the alien. His demeanor, tone and characterization are the stuff of legend. If you think the look of the alien Paul is cute, add in the performance of Rogen and he is equally endearing and extraordinarily funny.