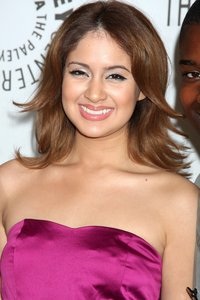 Let’s face it, with the exception of a few top notch American Idol girls, the guys really have it in the bag this year. The news of Karen Rodriguez leaving Idol this week wasn’t a shock, not because she can’t sing — because she can — but a girl was going to go and it happened to be her, that’s all.

American Idol season nine winner Lee DeWyze and the Black Eyed Peas killed the AI stage during the live results show, but it wasn’t all high notes for the bottom three. Joining Karen Rodriguez for the moment of truth were Haley Reinhart and Naima Adedapo. There was no way Naima Adedapo was going anywhere, even with her pitchy admission. Karen Rodriguez was left to sing for her life in the judges’ save and she did pretty well with Mariah Carey‘s Hero. “It just felt great to have at least that one chance,” she said after the song. “I can do so much better, and I know you guys believe in me.” Unfortunately, the spunky bilingual singer didn’t get the save and Randy Jackson assured her it wasn’t an easy decision. She took it like a trooper.

American Idol is now down to the final 11. The boys barely have to try at this point, especially James Durbin, who scored a spot to sing in the finale with Steven Tyler if he makes it to the big stage.

Is your favorite still in the American Idol competition?