Billy Ray Cyrus backtracks on some controversial comments he made in a GQ interview and says he’s calling off his divorce from his estranged wife, Tish Cyrus.

What a difference a few weeks makes. Last month, Billy Ray Cyrus took some flack for his interview in GQ. Now, he’s eating his words and calling off his divorce. 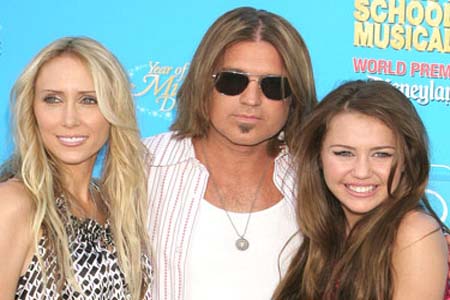 “I’ve dropped the divorce,” Cyrus said during an interview on The View, which aired on Friday. “I want to put my family back together… Things are the best they’ve ever been.”

Wow. We certainly didn’t expect this — especially after Cyrus hinted that his superstar daughter, Miley Cyrus, was out of control. He blamed the runaway success of Hannah Montana on the family’s problems.

“I feel like we are the daddy and daughter that we were before Hannah Montana happened,” Cyrus said of his relationship with Miley, 18. Now, he says he doesn’t blame the hit Disney show for the splintering of his family.

“I don’t think Hannah Montana ruined my family,” he added on The View. “Now fame — fame is a different animal. You’ve got to be careful with that thing.”

We’re happy that the Cyrus family is back together — but we highly doubt things are back to normal.

Do you think the Cyrus family is really on the mend?