A dress Kate Middleton wore at a 2002 fashion show at St. Andrews University sold at auction Thursday — for nearly $126K! What’s so special about this dress? 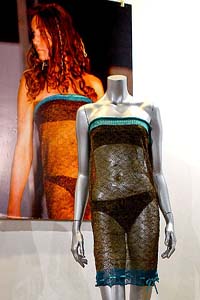 How much would you pay for a dress that once caught the eye of the future King of England? At least one person is willing to pay $125,000 – that’s how much a sheer dress worn by Kate Middleton fetched during an auction.

Middleton walked down the runway during a 2002 St. Andrews University fashion show wearing the see-through $50 dress — and that’s reportedly the first time that Prince William laid eyes on his future bride. The dress designer, Charlotte Todd, made it for a course assignment – and Middleton ended up modeling it.

“[The fashion show] was called ‘The Art of Seduction,’ which is quite apt, really. I didn’t know who Kate Middleton was and I didn’t put her in it. It was just pure chance!” Todd told People.

The dress – sold March 17 by Kerry Taylor Auctions – was displayed among expensive haute couture gowns worn by Princess Diana and lingerie worn by the Duchess of Windsor, Wallis Simpson.

“I’m thrilled,” Todd told People of her brush with royalty. “Everyone says that the fashion show was when the romance started and when she bagged her prince, so a small part of me will always be part of royal history. It’s madness!”