After some at-home time with her new twins, Celine Dion is back on stage! The diva returned to Caesars Palace in Vegas this week, kicking off her three-year residency at the Caesars Palace Colosseum. 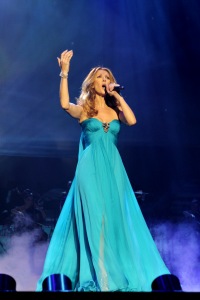 Celine Dion’s 2003 Vegas show, A New Day, ran 700 times, making Caesars the top-grossing venue on the Billboard charts for five years. After taking a year off for family time, Dion returned to the stage that was built for her on Tuesday, March 15.

Early reviews say the new Dion Vegas show dazzles. Robin Leach even called it “a magnificent masterpiece.” The diva ditched the backup dancers from her last tour for 31 musicians and three backup singers, creating an intimate show that promises to capture the romance of old Hollywood films.

“With the orchestra and the band, we’re going to be able to perform our songs like never before. The repertoire is going to be extraordinary…a mix of timeless Hollywood classics, along with all the favorites that my fans like to hear me sing,” Dion previewed. “It’s going to be a very beautiful show, and I think we’ll be raising the bar higher than we’ve ever done before. There’ll be some truly wonderful moments.”

Among those moments — and seven costume changes, a la Versace, Givenchy, Balmain and Elie Saab! — fans can expect a duet with Stevie Wonder’s hologram; a Michael Jackson salute and a peek at Dion’s three children, Rene-Charles, 10, and the twins, Nelson and Eddy.

“The world knows I just had two more beautiful babies,” Dion said. “If I come here and I don’t sing a lullaby or do not show one picture with my family, I think it’s going to be missing something. I love to share my private life.”

Watch for SheKnows’ interview with Dion next week to get the full story on the show straight from the diva herself.