Paul star Nick Frost fell into show business. Ask anyone who has seen his first work on the British comedy classic Spaced and they’ll agree: Frost is one funny man.

But the reason why Nick Frost found show business is that he was an aimless twenty-something and his friend Simon Pegg urged him to join his new show (Spaced) and the rest was history. 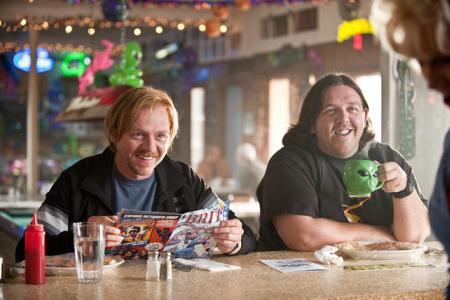 Pegg and Frost first hooked up on the big screen with the indie smash Shaun of the Dead in 2004 and re-teamed in 2007’s Hot Fuzz. The pair has impeccable comic timing that is on display in droves with their new comedy, Paul. Paul is voiced by Seth Rogen and is an alien that was stranded decades ago near Area 51. When he breaks out to try to go back home he runs into some car trouble and two seemingly helpless nerds on a Mecca-like journey across the Southwest visiting supposed alien hotspots.

In Paul, Pegg and Frost’s characters land in San Diego to attend the geek-fest Comic-Con and then drive their rented RV towards Arizona, Nevada and New Mexico’s Area 51. Coming up on a car crash, the pair stops to help the accident victim and they meet Paul. Frost hilariously faints as Pegg uses the moment in the film to showcase his impressive comic talents. Thus, the true story of Paul begins and the race to help the cute, little alien in his mission to return home.

Nick Frost phoned SheKnows from New York City for an exclusive chat about the process of making Paul and why he and Simon Pegg have such perfect comic chemistry.

SheKnows: Why is it that you like working with that wry fellow, Mr. Simon Pegg? 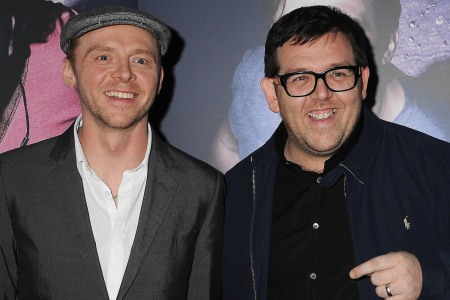 Nick Frost: Well, apart from the obvious of just saying he’s my best mate, which I think people are getting bored with us going on about our friendship, I think the fact that he’s a friggin’ good actor and he’s a great comedian and he has a great sense of what’s funny and when to drop it, so to speak. That’s why we enjoy working together. We’ve been together quite a long while and I often know what Simon is going to do before he does it which makes my job very easy — and the same for him as well.

SheKnows: What was the biggest challenge that you had making Paul? Was it acting to an alien that wasn’t there?

Nick Frost: Yeah, essentially. The biggest challenge is trusting double negatives and all the guys involved in making Paul, that when they say that Paul is going to be great you trust them because he’s not there at all and it still hinges on whether or not as a piece of technology Paul works. Within five minutes of seeing Paul and he sucks, the film is finished. You have a lot of trust in the effects guys that they know what they’re doing.

SheKnows: What was it like filming out in the desert in America? That had to be a unique experience for you as a UK citizen.

Nick Frost: It was amazing. We were in Santa Fe, New Mexico for three-and-a-half months. The beauty of Santa Fe, it gave us every kind of scenery we needed. Some days we were standing on these vast plains and then other days we were in deep pine forests, and then we were in the desert. The original idea of Paul came from us sitting around on a break while filming in the UK when the rain crippled us. We said, “Wouldn’t it be great to shoot somewhere where it doesn’t rain?” That became Area 51. It wasn’t a big jump from that to Paul. The thing that none of us realized is that New Mexico has a lot of rain [laughs].

Nick Frost on the women of Paul

SheKnows: I wanted to ask you about the actresses in this film. First off, Blythe Danner, the legend, is just a great, great woman. How did you find the experience of working with her? 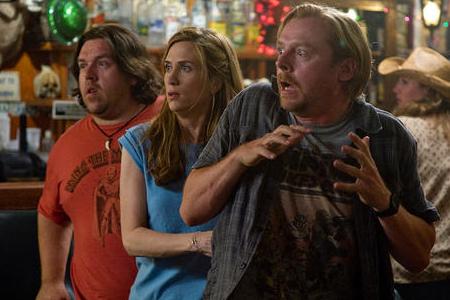 Nick Frost: She knocks you on the head. She is a great, great woman. She’s a wonderful actress and just as a person, she just comes and gives it her all. She’s honest. She’s charming and funny. She’s very maternal. Often on set she’ll give you a little massage and she’ll have a little technique and get her elbows in and try to loosen you up a bit. We hung out — this film more than any. That included Blythe, Sigourney and Jason Bateman. To see someone that you admired for so long actually turn up on set and they are everything you imagined that they would be and more, it’s a treat. It’s a real treat.

SheKnows: And then Kristen Wiig, somebody with such great comic timing, what did you make of her performance in Paul?

Nick Frost: If you think she’s good on-screen, you should see her off-screen as well. She’s so charming and clever and quick. She’s not afraid of anything and she’s comically perfect.

SheKnows: And the voice of Paul, I was just curious if Seth Rogen was always the person you were going to use.

Nick Frost: As writers, Simon and I, whenever we’d get to a point where you write five or six pages then you’d try and act the scenes out to each another to see if it works, we’d sit there and whenever we did Paul’s accent it was kind of a very gruff older American man. We were big fans of Rip Torn and Larry Sanders. I think we were fairly militant that we wanted this kind of voice and then Universal said, “What about Seth Rogen?” He has a tremendous pair of comedy chops. He’s very popular and he has this amazing voice. It seemed really right for us that Seth would be Paul. We even went back and we wrote stuff with him in mind. We forget that Seth’s in it. He’s Paul.

SheKnows: What drew you to acting and comedy? 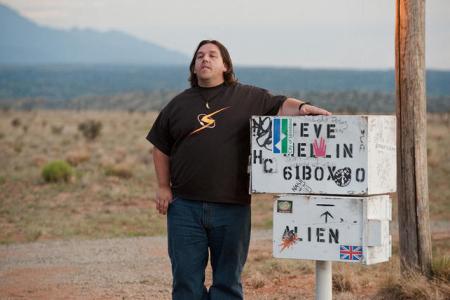 Nick Frost: It’s a bit awkward for me to say but I’ve always been perceived by friends and family as the “funny one,” so that was always in me. But in terms of acting, I never wanted to act at all. I’m not shy but it’s a lot of pressure having lots of people look at you while you’re trying to be funny. It’s tough. It’s not easy. But Simon wrote Spaced and said he’d like me to be in it. I did it for Simon to make him laugh [laughs]. I’ve been working ever since.

SheKnows: This is a silly question. Your hair and Simon’s hair in Paul was kind of long for you guys. Was that a conscious decision for these two characters?

Nick Frost: This was just me being lazy [laughs]. I didn’t want to cut my hair. Now, it’s growing out to quite a nice kind of Bieber style [laughs].

SheKnows: What would you like audiences to know about Paul? What can they expect?

Nick Frost: I would like audiences to go in with no expectations and enjoy a hundred moments of popcorn and laughter. That’s it. If people are coming out with a smile on their face thinking, “I really enjoyed that,” that is enough for me.