Can you imagine struggling as a solitary, 13-year-old nomad girl to cross the almost lifeless desert in Somalia in search of just a chance at freedom? This was the difficult road for supermodel Waris Dirie who, as a child, was stripped of all possibility of enjoying an intimate, sexual relationship by the barbaric and ancient practice of female circumcision or genital mutilation. When she was promised in marriage to a very elderly suitor, it was too much and the brave teenager hit the road alone.

In the heartfelt, entertaining and even funny film Desert Flower, another supermodel-actress, gorgeous Liya Kebede, plays Waris as a young adult, from her difficulties living on the streets in London up through her miraculous discovery and introduction into the high fashion industry. 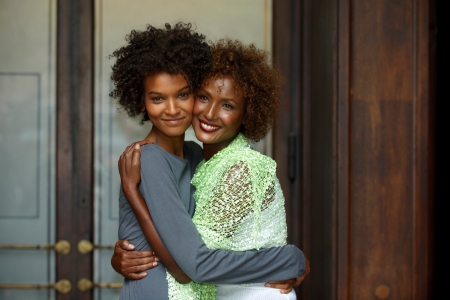 Turns out that the two beautiful African women (Liya is from Ethiopia, Waris from Somalia) have much more in common in their determined support of organizations that enable and empower women to live better lives and to eventually wipe out the practice of female genital mutilation from the Earth.

SheKnows met with Liya in Los Angeles to chat about this important film that also stars Sally Hawkins, her fight for women and the fun she had pretending that she couldn’t walk in high heels.

SheKnows: Why did you make the decision to not meet or have a relationship with the real Waris Dirie before making Desert Flower?
Liya Kebede: I think the minute you are given the responsibility to play someone who is alive and real, it’s always quite intimidating and a bit scary. You have this huge responsibility of portraying someone’s life especially when it’s a wonderful, little gem of a story that needed to be told. Sherry (Hormann, the director) wanted us to not meet. She wanted to really tell the story of a young girl because a lot of young girls have similar journeys to Waris’. It would help a lot of people to relate to the story.

SheKnows: But you did eventually meet?

Liya Kebede: I didn’t have a chance to meet her until the last day of the shoot. It was interesting because I felt like I knew so much of her. I almost felt uncomfortable meeting her. I had been given this window into her life and was standing there knowing all these things about her. It was so awkward and I was really nervous but she was really wonderful. She broke the ice. She gave me a hug and said, “Okay. We’re sisters now.” 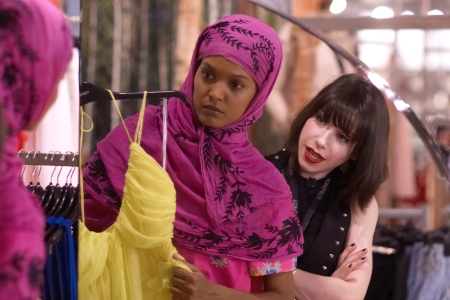 SheKnows: Waris’ book Desert Flower was a huge bestseller. Had you read the book before shooting?

Liya Kebede: I absolutely read the book. Not only did I read it, I used it a lot in my performance.

SheKnows: Had you seen pictures of her as a model?

Liya Kebede: Yeah, I did. I saw some videos of her as well before we started shooting but very little live footage on her.

SheKnows: What connection do you feel you had with her before meeting her? You don’t have her horrible past of mutilation.

Liya Kebede: No, but I related to that story of leaving your nest, your cocoon and learning the ropes of that new place and trying to survive in a foreign land. I related to that a lot, both of us coming from strong cultures and then coming to the Western side. I related to the fact that she went into fashion. We had that in common. We experienced it differently. Then also, her advocacy [for women’s health]. We had a lot in common.

SheKnows: How did your audition for this go?

Liya Kebede: It went good, I guess [laughs]. I first auditioned for a casting director in New York and it was great. Then Sherry saw the video and invited me to come to Munich to meet with them and screen test. They had German actors to help me do the test. After we did that for five or six hours, Sherry said, “Let’s go out for coffee.” I really didn’t know. But, she said to me, “For me, you are Waris. You got the role.”

SheKnows: Was making the transition from model to actress difficult for you? 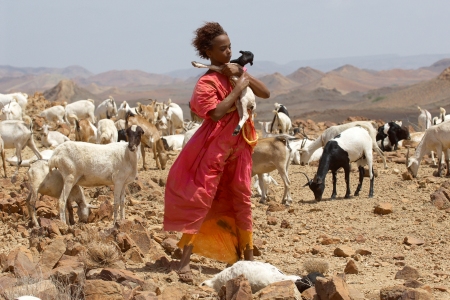 Liya Kebede: It was definitely an interesting thing to do and to experience as well, rightly so. As a model you have to play to the camera and be aware of it. Going into film, you have to learn to not be aware of the camera. I think that was a wonderful experience for me to find myself in that situation and now (with this film) to go inside and have an emotional connection to something was quite fulfilling.

SheKnows: What was it like to pretend you never walked in high heels before? You did a great job wobbling around.

Liya Kebede: It was fun. It was really difficult to try and not walk in heels because I’ve been doing it for a long time but we had fun playing around with that.

SheKnows: It’s hard for Westerners to understand something that is so ingrained in the culture, in the tradition. We say, “Oh, how repulsive and ugly the practice of female genital mutilation is.” But we can’t see it through the eyes of those in the culture. The film manages to condemn the people doing this without condemning the culture as a whole. Can you talk about that?
Liya Kebede: Sherry managed to do a film that is both sensitive and truthful. That was really important to all of us. We were going to talk about a subject matter that we hope this movie will help eliminate but won’t ostracize anyone. We shot all the Africa scenes in Djibouti and were working with all these actors and crew who were from there who were nomads and most women were circumcised who were in the film with us and so were the women we saw every day. When you are with them, you understand they really don’t have choices the way we do.

SheKnows: Is marriage the only choice?

Lila Kebede: Yes, for a young girl, that’s the only way out in life that she has. So she can’t mess that up. You have to do everything by the book to get to that place because that is the goal; the only thing you have. It’s a really sad situation. They have no chance to get an education. Even if they go to school, they’ll be out when they’re 13 to get married. Until that changes, until women can stay in school and find their own ways of becoming independent, it’s hard to fight it. But, once that happens, I think it will naturally just stop.

SheKnows: You’ve met women who were circumcised and were grateful that the story was being told. Wasn’t that a huge weight to carry?

Liya Kebede: We knew we had an incredible story and it mattered a lot how we would do it. It was a labor of love from everyone in the cast and crew. I hope that shows. 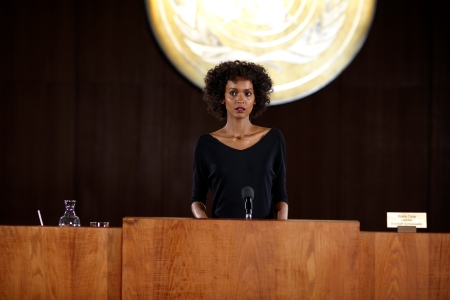 SheKnows: Can you talk about the causes you champion?

Liya Kebede: I champion maternal health. I’m a goodwill ambassador for the World Health Organization. It is a cause that doesn’t get the funding it deserves. Women die needlessly in childbirth when they don’t have to. I’m a mom with two children and had my kids in the U.S. and had all the best care I could have here. If I had had my kids in Africa in a village somewhere, the chances of my survival would be very little. I want to make sure that people realize that. Dying in childbirth has been going on for a long time. It’s not a new cause so it doesn’t get the attention it deserves.

SheKnows: You also have a line of clothing that empowers women?

Liya Kebede: Yes. It’s called Lemlem and it’s handmade in Ethiopia by artisans and weavers because that is the way our traditional clothings are made. It sells everywhere and the idea behind that was it’s a way to empower and employ people and help them become independent and help themselves and hopefully get other creators to see this beautiful product that is coming out of Africa, to encourage them to go to Africa to make more things and employ more people. Go to lemlem.com.

SheKnows: Is progress being made to stop female genital mutilation in Africa?

Liya Kebede: Yes. I think there is a difference being made but it’s a work in progress. There are big issues that we are tackling. It’s going to take time and a lot of education and patience. There are not simple solutions or simple problems. There are great organizations on the ground having incredible success going to little towns where most women were circumcised to almost no women circumcised. There are wonderful stories like that but it doesn’t move as fast as we want it to, unfortunately, but we have a good grip on it. This film will hopefully reinvigorate all those efforts.

SheKnows: What do you hope the audience walks away with after seeing this film?

Liya Kebede: I think it’s a movie that will move you, touch you, make you laugh and cry. It will inspire and educate you. Hopefully, you’ll come out of there wanting to do something.

Director Sherry Hormann adds: (Female genital mutilation) is a 3,000-year-old tradition. I’m providing an awareness of what is going on and have you feel the pain. A father nomad stood up after seeing the film on a screen in the middle of the desert and said, “I have six daughters. I was not aware of what is going on and how they do it because we don’t talk about it. I don’t want my daughters to be circumcised.” Then, 23 other fathers stood up. The movie can make a difference.

To learn more about this cause and empowering women go to: www.amnestyusa.org/violence-against-women