Jennifer Lawrence is reportedly the chosen one to play Katniss in the upcoming Lionsgate adaptation of The Hunger Games. Who did she beat out for the role?

It looks like the cast of the upcoming The Hunger Games can add an Oscar-nominated actress to the list: Jennifer Lawrence. 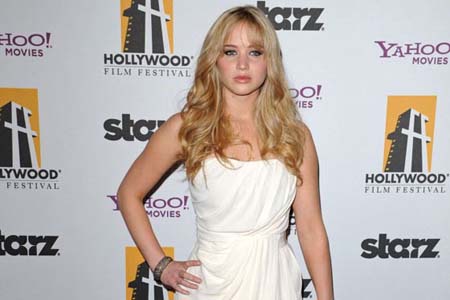 Lawrence, nominated for Best Actress for her work on Winter’s Bone, has been reportedly offered a role in the film. She was offered the role Tuesday and sealed the deal on Wednesday, according to a source close to the production.

The actress beat out plenty of heavyweights for the role of Katniss Everdeen, including Emma Roberts, Abigail Breslin and Hailee Steinfeld. Alex Pettyfer, Josh Hutcherson and Hunter Parish are all considered frontrunners for the role of Peeta Mellark.

The Hunger Games revolves around Katniss as she joins a survival contest to try and save her community. The book, written by author Suzanne Collins, is part of a trilogy that includes Catching Fire and Mockingjay.

Director Gary Ross and Lionsgate are planning to make all three films in the series.

We’re definitely digging Lawrence as Katniss — she has the right amount of personality, age and acting talent to really make the role work. We love Steinfeld and Breslin, but we think they’re a bit too young to properly get into the role.

What do you think? Are you happy with the casting of Jennifer Lawrence in The Hunger Games? Or, do you wish someone else got the part?