Lady Gaga’s head-turning fashion choices (meat dress, anyone?) have earned her this year’s style icon award from the Council of Fashion Designers of America. 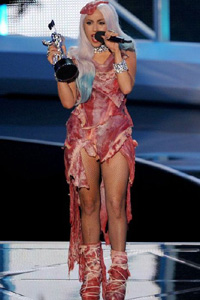 Other fashion icons up for awards include the Olsen twins, Alexander Wang and Phoebe Philo. The awards will take place on June 6 in New York City.

Lady Gaga was chosen by 370 members of the CFDA, who include stylists, journalists and retailers. The singer’s outrageous fashions and forward-thinking styles have certainly created a buzz among the fashion world.

From her crazy hats, skin-baring cat suits and even a meat dress, she never fails to make headlines.

Love her fashion or hate her fashion, Lady Gaga continues to ruffle feathers around the world.
Malaysia has censored her song Born This Way because of its pro-gay message. The Muslim country has censored the line in the song, “No matter gay, straight, or bi-Lesbian, transgendered life/I’m on the right track baby,” because it was deemed inappropriate.

Lady Gaga, who has admitted to being bisexual, said she picked the song because of its positive message, however, a spokesperson for the Malaysian radio station said they disagreed with the message. “The particular lyrics in Born This Way may be considered as offensive when viewed against Malaysia’s social and religious observances.”