Have Robert Pattinson and Kristen Stewart finally come out as a couple? The camera-shy duo was spotted taking a break from filming Breaking Dawn for a date night.

Kristen Stewart and Robert Pattinson were spotted having a low-key date night in Canada while on break from filming Breaking Dawn. The couple went to see a movie that is directed by Catherine Hardwicke, who directed the first Twilight film. 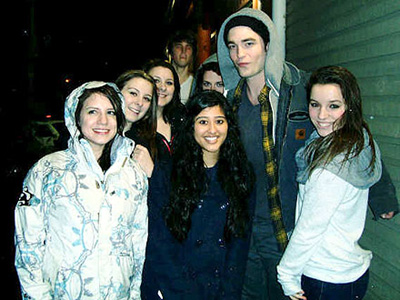 The couple, who just adopted a dog together, undoubtedly tried to stay incognito at the movie theater in Squamish, British Columbia, but fans spotted Edward and Bella…er…Robert and Kristen right away.

“They were watching Red Riding Hood,” a fan tweeted on Tuesday. “They were alone. He was nice. She was just awkward. Didn’t really wanna take photos.”

The fan snapped this picture — which says it all! You can barely make out Kristen’s head with a hoodie standing behind Robert.

“[Kristen’s] personality and body language is much like [her character] Bella,” the fan tweeted.

The couple was also spotted in Spain recently enjoying dinner at one of Pattinson’s favorite Spanish tapas bars called La Bodega. They were joined by Twilight co-star Kellan Lutz and a couple of other friends, however, Stewart and Pattinson left together.