Selena Gomez has been coy on her romance with Justin Bieber — until now! The Disney star revealed to David Letterman how she met her teen heartthrob. 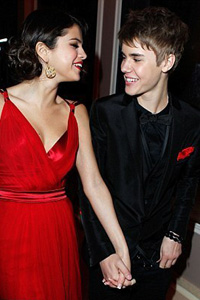 Selena Gomez stopped by The Late Show with David Letterman to promote her single, Who Says, but the talk show host managed to get her to open up about her relationship with Justin Bieber.

After showing the audience a picture of Gomez and Bieber at the Vanity Fair Oscar party, Letterman probed, “It was like a little prom night, wasn’t it? Looked like it.”

“Actually, his manager called my mom, who’s my manager,” she said. “I’m blushing!”

When Letterman asked point blank if they were dating, Gomez said they have been friends for two years. “He’s been in my life for so long, and it’s just nice to have someone that understands what you’re going through,” she said.

Judging by the pictures of the couple kissing and holding hands, as well as Bieber’s tweet to Gomez saying he missed her, it looks like there is no denying they are a couple.

Gomez has had to deal with her share of haters — especially from overzealous Bieber fans — however, she seems to be taking it in stride.

“I don’t feel like I’m doing anything wrong,” she said. “I’ve been best friends with him for a very long time. It does hurt my feelings a lot but I try not to focus on it. I have a strong family and great fans.”