Sources are claiming Joe Jonas and Ashley Greene are no more. Did Hollywood’s cutest couple call it quits? 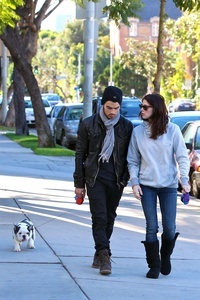 Is Joe Jonas and Ashley Greene’s young Hollywood love fizzling? Reps for both stars are confirming the news to UsMagazine.com. “We can confirm they both have parted ways and have no further comment,” the reps revealed.

Ashley Greene and Joe Jonas began dating in the summer months of 2010 and the singer was recently given the “cute” boyfriend label when he presented his Twilight honey with a sweet birthday present.

One source is telling UsMagazine.com, “They broke up shortly before her birthday, then got back together,” apparently so she’d have a great birthday at West Hollywood’s STK.

“He wanted to make sure everything was perfect,” another source revealed. “He was really sweet and conscientious.”

But like many young couples, they’re just ready to move on. The second source is saying, “Joe wasn’t that into it.”

What’s really interesting about this whole breakup is Joe Jonas fawned over Ashley Greene in the new issue of Details magazine.

“She really puts my feelings first. She understands my busy schedule.” He added, “Her dad can drink me to shame. He’s awesome.”

We wonder if Joe Jonas and Ashley Greene’s father will stay friends.