Katie Couric’s contract with CBS is up in May. What is Couric considering doing next? 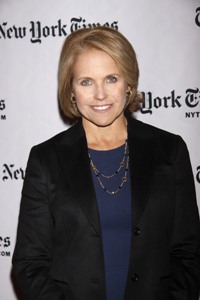 Katie Couric was supposed to be the next big thing as a news anchor when she left the Today show. After 15 years as the perky morning host, she was actually getting to sit behind a news desk during primetime.

Ratings weren’t quite what CBS hoped for though. Couric’s contract is up at the end of May and Access Hollywood is reporting that Couric has gotten a few new offers to consider.

According to Access Hollywood, Couric could end up at NBC, ABC, CNN or right where she is. CBS is reportedly offering a syndication deal as well as continued access to their news division. CNN may be offering syndication as well. (They’re syndicating Anderson Cooper’s fall offering, Anderson.) ABC and her old stomping ground NBC are apparently on the syndication bandwagon as well, but they’re adding on a new division affiliation.

So where does Katie go from here? We’ll let you in on all the details as soon as they’re released. Weigh in here. Did you agree with the critics about Katie’s CBS show? Do you watch? Do you just miss her smiling face in the morning? Let us know!