Austin’s South by Southwest Music and Media Conference is all about networking, partying and, most of all, rocking out. After premiering the new documentary Foo Fighters: Back and Forth, lead singer Dave Grohl and his band got in on the party with a secret, surprise show!

The Foo Fighters have never made an appearance at the SXSW Music and Media Conference, but this year, the legendary rockers made up for that. The Foos were in Austin to premiere the new documentary Back and Forth, which tracks their 16-year history, which started back in the ’90s with Nirvana drummer turned Foo frontman Dave Grohl. 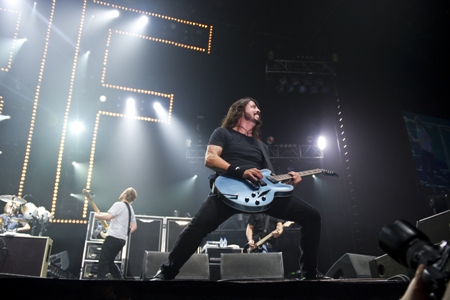 Back and Forth is getting good reviews, but it’s the after party everyone’s talking about today. After the Tuesday, March 15 screening, guests got a surprise invite and about 1,800 South by Southwest fans made it into Stubb’s for a rocking outdoor concert.

“Hey, we are (expletive) movie stars!” Grohl cried, before the band launched into a 100-minute set that started with their upcoming album, Wasting Light.

Word is, the Foo Fighters put on a fantastic show and the new tracks are strong, but fans always want to hear the classics. This crowd was not let down.

After playing through Wasting Light, Grohl said, “That’s the new album…And this isn’t!”

Then the Foo Fighters took fans back, performing Foo faves like All My Life, Everlong, Learn to Fly and The Pretender, with a few more expletives thrown at the crowd of industry “nerds” for good measure.

The Foo Fighter documentary Back and Forth was directed by Oscar winner James Moll (The Last Days) and hits selected theaters April 5. It will also air on VH1 April 8.