Why did Justin Timberlake really break it off with Jessica Biel? He was “miserable” with her. Ouch! 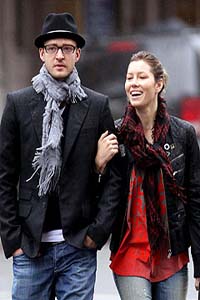 Justin Timberlake just wasn’t that into Jessica Biel — he was reportedly “miserable” with the actress and was actively pursuing a split after the Golden Globes in January, according to US Weekly.

We so called this — Timberlake and Biel had the brother-sister relationship chemistry going on the whole time they dated. Also, Timberlake looked more like Timberpuss every time he was photographed with Biel — he never showed off his signature flirty style around her (at right!).

“He hasn’t been happy with Jessica for close to two years,” a source close to the singer told the magazine.

“You’d be surprised at how soon the love was lost on this one. Justin was just miserable,” the source added.

But Biel wasn’t ready for the split.

“It just stung her in the heart,” the source said. Timberlake reportedly came clean with Biel around his January 31 birthday. “He just said he didn’t want to marry her and it didn’t feel right.”

But did he come clean on his alleged relationship with actress Olivia Munn?

“He didn’t admit the cheating, even though we all knew it,” the source added.

Well, we’re happy it’s over — for both their sakes. JT won’t have trouble finding someone else, that’s for sure. And for Biel? She’s gorgeous — so she won’t have a problem either.

Were you surprised about Justin Timberlake and Jessica Biel’s split?