After selling out his live show in minutes, Charlie Sheen has added more dates and cities to his My Violent Torpedo of Truth tour.

Charlie Sheen’s live tour, My Violent Torpedo of Truth, may be coming to a city near you — whether you like it or not. Kicking off in Detroit April 2, Sheen (pictured below with his goddesses) has added more tour dates after the Detroit show and Chicago show sold out within minutes. 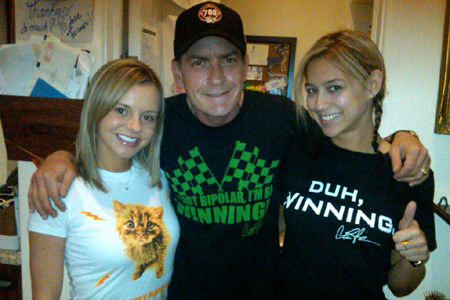 The popularity of the show is definitely adding even more fuel to his fire. “After years of being at the mercy of a decaying troll, charliesheen.com is finally in the hands of its Warlock owner!” he tweeted. “Fastball; Detroit/Chicago sold out in minutes… Thanks to Sheen’s Cadre..! #WINNING”

TMZ reported that Sheen even broke a record at Ticketmaster for how fast his show sold out!

Ticket prices range from $47 to over $100, however, Sheen vows to donate $1 from each ticket to the Red Cross’ Japanese earthquake relief fund.

Get more details on tour dates and buy tickets to Sheen’s live tour at Ticketmaster.