Reese Witherspoon is ready to get hitched! The Oscar-winning actress will reportedly marry Jim Toth on March 26. Get all the wedding details here! 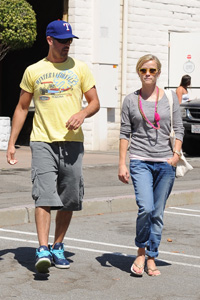 Actress Reese Witherspoon will be a married woman as of March 26, sources report. Reese and Hollywood agent Jim Toth, who have been engaged since December 2010, will tie the knot at her $6.95 million Ojai Valley estate.

Witherspoon, 34, purchased the seven-acre ranch in 2008 and it has four bedrooms and three bathrooms and features horse stables, two guest houses and a pool.

The Water for Elephants actress is rumored to be wearing a Monique Lhuillier wedding dress — which will go perfectly with her four-carat Ashoka diamond engagement ring. The couple has invited 100 guests and celebrity event planner Yifat Oren has worked with Witherspoon to create a beautiful wedding. Sources tell Radar Online that “candles and flowers will be everywhere, in white and pastels, for an intimate feeling.”

No word yet on who will be in attendance, however, we are sure Witherspoon’s two children with ex-husband Ryan Phillippe (Ava, 11, and Deacon, 7) will be at the nuptials. Witherspoon and Phillippe divorced in 2007 after being married for seven years.

Witherspoon and Toth may try to sneak in a honeymoon before she starts promoting her newest movie, Water for Elephants, which co-stars Robert Pattinson. The movie is slated for release April 22.