Justin Bieber has been immortalized in wax! Three wax statues of the teen heartthrob have been unveiled at Madame Tussauds. 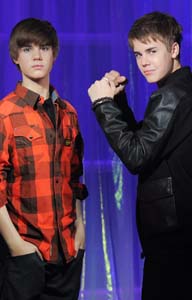 Since you’re not Selena Gomez you’d likely never have the chance to get all huggy with Justin Bieber — unless you visit one of three Madame Tussauds wax museums where statues of the heartthrob have been unveiled!

Bieber’s three wax figures are being shown in New York, Amsterdam and London and feature his old haircut — the signature swoop bang beloved by millions the world round.

The singer was on hand at the unveiling in London and tweeted, “Arrived at @tussaudslondon to see my wax figure! The first time I saw a wax figure was in NYC and all we could do was look thru the glass,” he wrote. “Now we are here in London and they are about to show my figure here and in amsterdam and in nyc at the one we looked thru the glass. #Dreambig.”

In a previous interview, Bieber talked about how excited he was to be cast in wax.

“I’m honored to be getting my own wax figures,” Bieber said. “To be immortalized in wax alongside some of my idols — Michael Jackson, Prince, Beyonce and my mentor, Usher — is incredibly exciting and very cool.”