Brad Womack picked Emily Maynard as his true love on The Bachelor — but are they even still together?

Brad Womack told Emily Maynard that she is “The One” — but in the single day since the After the Rose special aired, rumors are flying that the two have broken up for good. 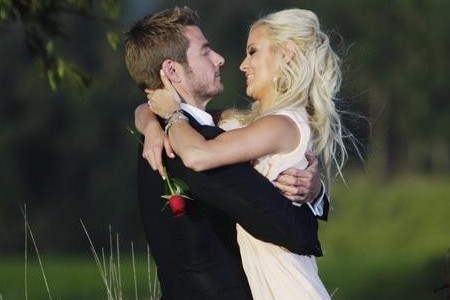 The couple admitted on the special that they had briefly separated due to the strain of keeping their romance a secret while trying to maintain a long-distance relationship. Host Chris Harrison says another huge hurdle is Maynard’s daughter, and whether or not Womack is truly ready to be a dad.

“They’re already having their troubles, which doesn’t bode well,” Harrison told Ryan Seacrest. “In particular, this couple is a little bit bigger than them — this is what I think is really troubling Emily, it’s not just her, it’s her daughter, and she thinks very highly of that.”

“As much as he wants to be a dad, he’s not. Your life is not your own, decisions are not your own. There’s no such thing as selfishness. I really respect the fact that she threw the brakes on this thing.”

“It’s been extremely hard,” Harrison said. “They actually broke up a couple of times. They both are incredibly stubborn, they’re very much alike and neither one of them give. And they’ve had some knock-down drag-out fights.”

Despite rumors that the pair broke it off again after the special aired yesterday, they say they are still very much together. Womack said in a statement:

“At long last, Emily and I can be open to the world and each other about our relationship. Though we are madly in love, it has been a bumpy couple of months for us and our priority right now is to focus on our relationship. We hope that you can respect our privacy as we return to normalcy and begin our off-screen lives together.”