The Lincoln Lawyer has seemingly popped up out of nowhere. So what is it all about? 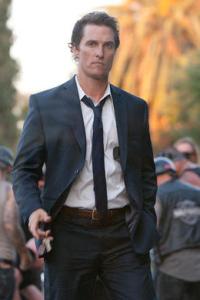 In Matthew McConaughey’s newest film, The Lincoln Lawyer, he plays Los Angeles criminal defense attorney Mick Haller who operates out of the back of his Lincoln sedan. He lands the case of his career when he meets Louis Roulet (Ryan Phillippe), a playboy from Beverly Hills accused of rape and murder. Though the case seems straightforward, it quickly turns into a life or death scenario for Haller.

The film, which is an adaptation of the novel by Michael Connelly, boasts quite a cast, including Marisa Tomei, John Leguizamo, Bryan Cranston, Frances Fisher and the fabulous William H. Macy.

It’s a bit of a departure for Matthew McConaughey, who has been sticking to chick flicks and comedies lately. After films like Fool’s Gold, Failure to Launch and Ghosts of Girlfriends Past, I’m certainly ready to see him tackle a drama.

What about you guys? Have you seen the trailer? What do you think? Let us know below.